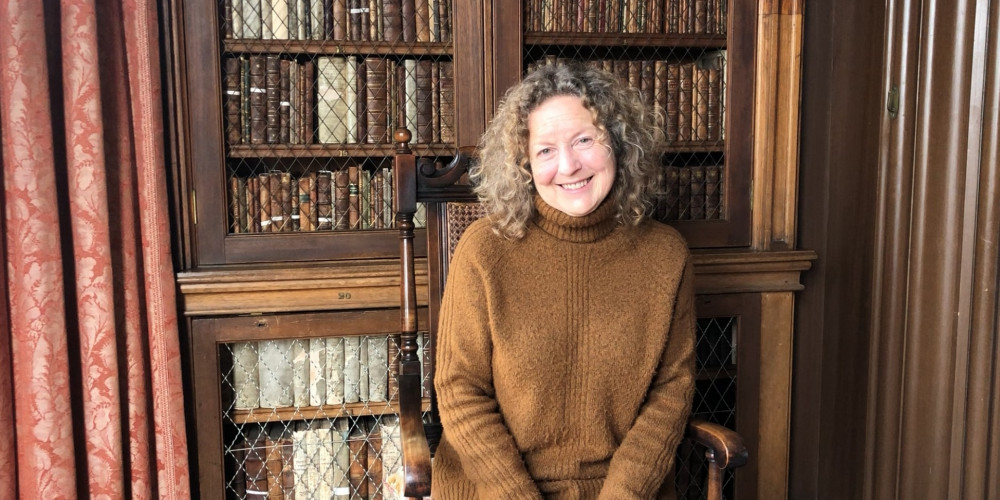 Watch all five stories in the series 'A Gift of Tales' told in Abbotsford's historic house by Mary Kenny.

These folk tales resonate with objects in the collection, with local landscape and with Sir Walter Scott’s writing and legacy.

As a child Walter Scott heard tales from his grandparents at Smailholm. As a young man he travelled widely, collecting stories and ballads from the rich oral tradition of Scotland and Borderlands which inspired his life and work.

This selection of tales is specially curated and told by Mary Kenny, our Heritage Engagement Officer, and they are suitable for ages 7-107!

WEE JOHNNIE
This folk tale warns against leaving a new baby unattended, for in olden times it was believed that the fairy folk would swap one of their sickly children for yours if they could- and with dire consequences!

CANOBIE DICK
In this supernatural tale, Borders horse trader Canobie Dick meets a mysterious stranger on the moonlit Eildon Hills. In aiming for the best deal for his horses, Dick gains an eerie adventure, and so much more than he bargained for!

THOMAS THE RHYMER
In this famous local story the young laird of Ercildoune, resting beneath a tree on the Eildon hills, is surprised by a beautiful woman on a grey horse. A cheeky kiss leads to a journey into the liminal world of the Fairy Folk, and the great, ancient legend of the seer True Thomas.

THE MAGIC QUERN
The wild salty seas have from ancient times been the highways of trade, wealth, and adventure. Sea roads also for pirates, marauders, and superstitious men- all of which feature in this curious story is set in north-eastern lands and the tumultuous seas off Orkney.

MUCKLE - MOUTHED MEG
This local Reiving legend harks back to the early 17th century, when one of Sir Walter Scott’s ancestors got caught red handed thieving cattle! Young Watt Scott faced a tough choice to avoid infamous border justice and save his life- but at what price?

My telling of this traditional changeling story was drawn originally from Katherine M. Briggs ‘British Folk Tales and Legends – A Sampler’ as ‘Johnnie in the cradle’, published by Granada, a treasured possession since 1985. I have heard and read many variations over the years and honed ‘Wee Johnnie’ through telling the story many times.

Sir Walter Scott writes about his mother’s fairy charm, the Toadstone, about fairy changelings and remedies for recovering a human child - quoting the ‘Brewery of Eggshells’ tale: ‘On the Fairies of Popular Superstition’ in the introduction to ‘Tamlane’ in the ‘Minstrelsy of the Scottish Border’, published by Ballantyne, 1833. Fairy lore and superstition weave through many of Scott’s works, exist in copious ‘notes’, and are featured in his library.

I originally came across this story nearly forty years ago, many years before I imagined living in Scotland, in Katherine M. Briggs ‘British Folk Tales and Legends – A Sampler’, published by Granada. No name was credited, nor in the many other identical published texts I have seen. Then, by chance I was delighted to find the self-same text in my own copy of ‘Waverley’ a few years back- by which time I had settled in the Borders, discovered Scott, walked the Eildon’s, and told many stories - including this one - at Abbotsford. It remains a firm favourite.

Sir Walter Scott published this tale within ‘Fragment of a romance which was to have been entitled Thomas the Rhymer’, in appendices to the general preface, ‘The Waverley novels’ standard edition volume 1. Published by A&C Black, London 1895. Scott also published it in ‘Letters on Demonology and Witchcraft’ 1830, quoting from the oral tradition with which he was familiar, linking the events to the Battle of Sheriffmuir in 1715. He also notes that a similar, much older legend is given in The Discoverie of Witchcraft (1584) by his English near-namesake, Reginald Scot, and that stories of this type exist in Celtic folk tradition across northern Europe.

Memorably, I heard this story and ballad from the renowned storyteller Duncan Williamson many years ago and have heard and told it many times over the years. Versions are in many anthologies including “Wonder Tales from Scottish Myth and Legend” by Donald A. Mackenzie, published by Blackie and Son Ltd. 1917, and “The English and Scottish Popular ballads” 1882- 1898 by Francis J. Child.

Scott devotes no less than 30 pages to Thomas the Rhymer in his “Minstrelsy of the Scottish Border”, expanded to three parts. Thomas Learmont (c1220-1298) was Laird of Ercildoune - now Earlston – and the ruined medieval tower known as Rhymer’s tower still stands there. He was a famous Seer, and chapbooks of his prophesies were commonplace in homes for centuries. Thomas returns from Fairyland in other folk tales and locations, and elsewhere in Scott’s writing - including ‘Canobie Dick’.

I was given this story by my sister, storyteller Marion Kenny, inspired by a version by Anna Blair in ‘Scottish Tales’, published by Chambers. In old Icelandic and Scandinavian tales, elements of this story are found including names, and the origin of sea -salt theme, but with different characters and narrative.

Scott published ‘The Pirate’ in 1822, a fast -paced tale of shipwreck, survival, and romance, packed with reference to Norse influence and tradition. The Pirate of the title was based loosely on the notorious ‘Orkney pirate,’ John Gow, who Scott had heard of during a six- week cruise with the Northern Lighthouse Commissioners in 1814. On return he soon amassed a collection of pirate literature and chapbooks. There is a quern stone in his collection at Abbotsford.

The ruins of Elibank Castle stand above the Tweed not far from my home and a sculpture on the opposite bank describes the story. My telling is drawn from several sources including ‘Folktales of the Scottish Borders’ by William and Susan Platt, published by Harrap, ‘Wilsons Tales of the Borders,’ published by The Ettrick Press, and articles on the Web.

This is a tale Sir Walter Scott enjoyed telling, reflecting his deep interest in heraldry and family history. In the anti- room there is a drawing by Charles Kirkpatrick Sharp - ‘The Reivers Wedding’ which illustrates it. The marriage of William Scott and Agnes Murray took place in 1611. They had eight children and one, ‘Wattie Wudspurs,’ features in the ballad ‘Jamie Telfer of the Fair Dodhead’ in Scott’s ‘Minstrelsy of the Scottish Border’ published in 1812. The story resonates with Scott’s plethora of weapons and spurs, heraldry, and stained-glass and his day job in law.